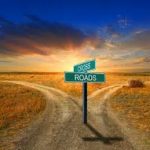 Why did you make the decisions you made – the major decisions – the ones that changed your life?  What subject to major in, whether or not and who to marry, what kind of career you wanted.  Leaving, staying, meeting a situation part way. What made you make those decisions?

Our lives are full of both minor and major decisions. What makes you choose the way you do?

It took me about three hours to make the decision to move from California to the Midwest to be near two of my children. Yes, the seed had been planted when my daughter said if I needed help I was half way across the country.

My physical situation had changed, a roommate had moved out and the options for a new roommate were dismal. I couldn’t afford to live where I was without a roommate.

The choice was immediate. I knew in that moment that I didn’t want to continue in the pattern I was in. I was open to change and the seed had been planted. So I got online, looked up apartments in my daughter’s area and called her to say I was coming. The decision was made and committed to in three hours.

When I decided to leave New York City after 14 years, it seemed sudden but in fact it wasn’t. There was a period beforehand when I couldn’t find the right job, when I felt my holistic education was complete. I called my sister in California to ask my mother if she would lend me the money for the move and in an hour my sister was back saying “yes.”  I moved from coast to coast in a few weeks.

How did I find where to live?  My sister suggested Santa Rosa, which is an hour away from San Francisco. I ordered a phone book and when it came there was a Health and Harmony fair and I knew it was a good place for me. I called the temp agencies there to see what I could earn in the jobs I was qualified to take so I knew what I could afford in rent. And I went cross-country, taking my 7-year-old granddaughter who I was raising and two dogs and two cats.

In my forties, I stopped by the University of Missouri Theater Department to see how I might “play” in their department and the head of the department said, “Great, you can work on your Master’s degree.”

It had never crossed my mind. But I transferred by 20-year-old BA degree and started school, even though I was a mother of four. It took me three years but I got my Masters! That was unusual for a woman, especially for a woman in her forties.

When you know yourself, you can make aligned decisions quickly.

I’m not sure I can address “deliberation”, as in taking a long time to make a decision. For me, it either feels right or it doesn’t. The timing is either right or it isn’t.

Sometimes I over-think.  And sometimes I imagine it’s harder than it turns out to be. Make certain your mind is helping, not hindering.

The key to being able to make any decision is to know yourself. Know what you need, what you want, and what you’re capable of doing. So, for me, a well-thought-out decision is simply about  understanding myself well enough to make an informed, aligned decision when it shows up.

Many years ago I was applying for a job. The manager said he’d had 132 applications for the position. We had come to the end of our interview and had stepped outside but were still talking when suddenly he said, “Let’s do it.” And he hired me. But he had been thinking about what he wanted and needed for the job 132 times. On the one hand that’s not a sudden decision but it was a well-considered one. Whatever I said, something clicked to stir him into making the decision.

A choice of no choice

There have been times in my life when I made choices because the call was so deep and strong there was nothing else to consider. That was true for a few major choices that were life-changing to more than just me. I don’t regret the choice but there were huge repercussions on the lives of some important people in my life.

I am driven from within. And I listen to the nudges and ideas that show up. Sometimes it’s the combination of an old skill with a new idea. Sometimes it’s a new need to share a particular idea that calls for a new format. I’m very responsive to my creative calling.

However, it took a long time to realize that I was not living with my tribe and that I needed to go online to find one. My tribe is not old people in a senior center, it’s spiritual light workers who are active in their exploration of the unknown. I withdrew on the in-person plane and developed a relationship with the people I found online who were aligned with my “next.”

This is tricky. I allow my life to unfold so my “next” is rather fluid.  However, as we all live in cycles, when we pay attention we know what cycles we’re in and can make choices that are aligned with the direction we’re headed.

I became drawn to Shamanism. I’ve been through Christianity, New Thought, mysticism, energy healing, and Taoism, taking from each what worked for me in my life choices. Now I have this incredibly strong urge to understand life by understanding nature, her cycles, her flow, her messages of wholeness. And that to me meant exploring the nature-based spiritual practices of the indigenous people of 700,000 years ago that preceded Christianity and all spiritual philosophies. Back to the beginning.

Nature. I seek to learn and be guided by nature.

And I don’t know where it’ll lead me. I only know my core calling, to explore the Originating Mystery, to understand and feel and work with my energetic connection with All That Is, and to make certain that how I express my passion places me in deep service to others.

Sudden decision?  Major decision. Just a choice?  A choice moves you in a new direction. You can never go back. Only ahead.

And that’s a good thing.

To Sing a Deeper Song Consider:

What Do You Need to Leave Behind

How To Write a New Life Story

Video: Your Body Suit and Invisible Self

Podcasts: 35—How to Hold the Space for Change.