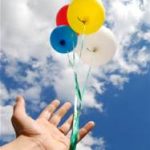 My pedicurist is a healer. Recently she helped me release something big and old. We don’t have to know what it was, just that it was time to let it go. I can feel the release throughout my entire body.

And it made me think. Why don’t I create some sort of ritual, ceremony, intention each day to let go of something within me that I no longer need?

What do you need to release?

Whatever shifted in me affected my body, it affected my mood. It was a good thing to let go. And I know no specifics of what or where it was. You may very well be aware of a particular area of stuck-ness, but you can create your “ceremony of releasing” without knowing the details.

I have used both specific and unspecific affirmations in my releasing ceremonies. The unspecific ones are a bit more exciting because you don’t have any idea what’s going to leave. You don’t need to define what you want to release. Let your inner self take care of that. Just express your willingness to release what no longer serves you.

A ceremony can be as a simple as an affirmation said while looking into your own eyes in a mirror. It can involve slips of paper that you tear up or burn. It can include essential oils, or crystals. You can add bells or toning. You could dance or sing or chant “aum”. This is your ceremony. Make it as elaborate or as simple as you need.

The cornerstone is in the affirmation

All affirmations are made in the present tense, as if they have already happened:

At the end of each day, journal what shows up so you notice it. It may be subtle. It may be dramatic. On the days that I choose a specific affirmation (such as for my body), I’m aware of being conscious of my choices around caring for my body all day long.

But the most fun are the surprises that show up when I’m willing to release whatever I no longer need. Sometimes the answer comes as a new awareness. Sometimes it shows up as an actual adjustment in the alignment of my body. Other times it’s a stunning new opportunity that appears, which I’m ready to take.

It’s very powerful to choose to release something each day. It seems that the simple idea of intending to and being willing to release something is enough – whether you affirm that you’re releasing whatever you no longer need, or indicate a specific area in your life that feels blocked.

Be willing to change

Releasing beliefs and blockages that no longer serve you is going to leave a space that might feel empty. Or open. Or serene. Notice it and don’t rush to put more stuff into it. Allow Tao to organically offer you choices that you can accept or reject. Change is exciting. Change is challenging. Change is a constant in our lives.

As you begin to use a ceremony of releasing in your daily spiritual work, notice what works best for you – either in the results or in your willingness to perform whatever ceremony you create.

I have included my releasing ceremony in the small blessing ceremony I perform when I first sit at my desk in the morning. I sometimes put it into the end of my meditation. You could affirm it on your run or during your exercise. Or even when you’re in the shower. Whatever works for you.

The changes may be subtle. Perhaps at the beginning you might want to write down the stuck status of various aspects of your life so you can look back and see the change.

It’s important to check in with yourself at the end of the day so you can become aware of what happened. It may be subtle but it will be there!

What do you need to release? How will you do that? Are you up for adding a ceremony of releasing into your life?

In order to Sing a Deeper Song:

• Spend the next seven mornings performing a releasing ceremony the appeals to you.

• Create a ceremony around the releasing process – crystals, oils, journaling, gongs, toning – or let the simple act of writing down an affirmation be enough.

• Write your affirmation in the present tense.

• Experiment with being both non-specific and specific in what you propose to release.

• At the end of each day, review what happened and notice the changes.

• At the end of the week, decide how you would like to continue this ceremony of releasing.

To Sing a Deeper Song

On Coming to the End of a Cycle
When Do You Let Go?
Learn to Honor Your Inner Rhythm
The Power of Your Personal Path
41 – How to Make Decisions When Your Let Your Life Unfold 7
22 – Create Your Own Spiritual Journey
Steps to Deepen Your Spiritual Awareness
What is Your Truth?